AD 309. Rome teeters on the brink of war. Constantine's army is on the move. On the Rhine frontier, pagan Germanic ba 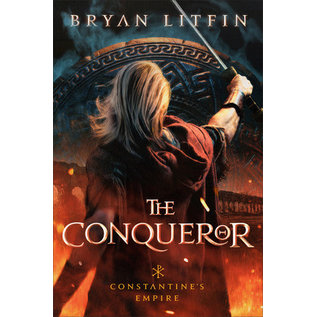 
AD 309. Rome teeters on the brink of war. Constantine's army is on the move. On the Rhine frontier, pagan Germanic barbarian Brandulf Rex joins the Roman army as a spy. Down in Rome, senator's daughter Junia Flavia finds herself embroiled in anti-Christian politics as she works on behalf of the church.

As armies converge and forces beyond their control threaten to destroy everything they have worked for, these two people from different worlds will have to fight together to bring down the evil Emperor Maxentius. But his villainous plans and devious henchmen are not easily overcome.

Will Rex and Flavia live to see the Empire bow the knee to Christ? Or will their part in the story of Constantine's rise meet an untimely and brutal end?


Travel back to one of the most pivotal eras in history--a time when devotion to the pagan gods was fading and the Roman Empire was being conquered by the sign of the cross.

"Bryan Litfin brings a historian's background to the story he tells about Constantine the conqueror, giving you a feel for the time and actions of a historic figure. This is still fiction, but it tells a good story well. Enjoy."--Darrell Bock, Executive Director for Cultural Engagement, Howard G. Hendricks Center for Christian Leadership and Cultural Engagement;
senior research professor of New Testament studies


"The Conqueror is a wonderful mix of excellence in storytelling and keen insight into the setting's historical context. This is what you get when a historian crosses over the authorial divide into the world of fiction. Read this book! Read all of Bryan's books! They are enjoyable from beginning to end."--Benjamin K. Forrest, author and professor