Being a Christian Without Being an Idiot! (Brad Stine), Paperback

Home / Being a Christian Without Being an Idiot! (Brad Stine), Paperback 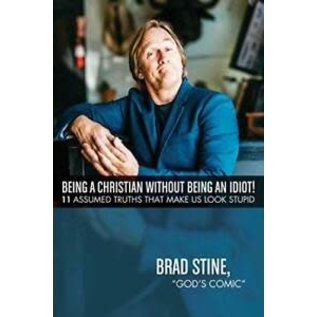 Brad Stine is known as the man who revolutionized and launched a new era of Christian comedy in America. With his breakout album, Put A Helmet On!, he single-handedly redefined Christian stand-up comedy. Brad has thirty years live performance, film, and television experience. Brad was a regular social commentator on Fox & Friends live, every Monday morning for six months. He has been featured in The New Yorker, New York Times, Christian Science Monitor, Los Angeles Times, Wall Street Journal, and USA Today. He has been profiled on NBC Nightly News, HBO, Showtime, CNN, Glenn Beck, Hannity & Colmes, NPR'S Fresh Air, ABC's Nightline, MTV, and Comedy Central. He has had material published in Reader's Digest and Focus on the Family magazine.

"I, for one, am no longer willing to imprison the amazing grace and liberty my faith has given me to reach out to a world begging for authentic Christianity to save their terminally ill souls."
-Brad Stine Jesus said, "The truth shall set you free," which, by implication, must mean, "The false will imprison you." From personal experiences in his ministry through comedy, Brad Stine has chosen eleven concepts to consider as a Christian, like: - All "true" Christians will be offended by the same things and
- Sinners are worse people than I am. Are they really true, or do we just believe them to be credible--even though there's no biblical support for them? More importantly, how does the belief in their veracity affect non-believers if we're wrong? Brad has carefully considered these ideas, as well as lived many of them. Some of you reading this may disagree with some of his conclusions, but if this book causes you to reevaluate what your faith means to you and in what shape it can come to you, then it has done its job. Christians are different from each other in our theology, denominations, and social interactions, and you know what? That's AS IT SHOULD BE! Christians who have taken the "If you don't all behave exactly like me, then you're not really a Christian" road have done the greatest disservice to furthering the Gospel! "Brad Stine is a treasure! He delivers hard-hitting truth while being insanely funny, as though George Carlin had been filled with the Holy Ghost! We need much more of his voice in our culture."
-- Eric Metaxas, #1 New York Times Bestselling author of Bonhoeffer and host of the nationally-syndicated Eric Metaxas Show
Add your review
0 stars based on 0 reviews